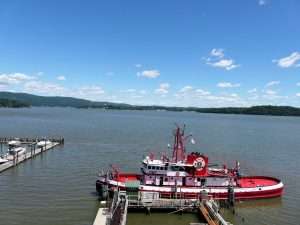 The Van Cortlandtville Historical Society will host a talk on the legacy of the FDNY Fireboat John D. McKean on the Hudson on Saturday, May 21st.

David Rocco of Yorktown, an accomplished photographer and historic preservationist, will talk about the life and legacy of the historic Fireboat, as well as the ongoing efforts to restore it for all to tour and travel on, especially on the Hudson River. Currently moored at a dock on the west side of the Hudson at Stony Point, the John D. McKean was considered “the finest fireboat in the world” when it was built in 1954 with “state of the art” marine designs and firefighting features.

In his Power Point picture program, Rocco will highlight three of the most prominent parts of the McKean legacy: The Staten Island Ferry Terminal Fire in 1991; the heroic rescue and recovery operations in New York Harbor during the September 11th, 2001 attacks on the World Trade Center; and the “Miracle on the Hudson” plane crash landing in January 2009.

In his body of work as a photographer, Rocco has chronicled in pictures some of the most important historic restoration projects in the Hudson Valley region. He is known for his stunning pictorial essay — on land and by air — documenting the construction and completion of the new Tappan Zee Bridge, and the demolition of the old bridge. A number of these photos that were published in 2016 were considered for a Pulitizer Prize in Photography. His photo work has been exhibited in several libraries in Westchester and published in a wide variety of noted publications, and his photo images on “The Damage and Destruction of Hurricane Sandy” have been exhibited at the Arts Westchester Gallery in White Plains and The Museum of the City of New York. His on-the-scene photo work from a helicopter when a huge construction crane collapsed across seven lanes of the Tappan Zee Bridge appeared on the Engineering Catastrophes episode of the Science Channel.

Over the years, Rocco has been a volunteer and organizer of many charitable, cultural, historical and environmental initiatives in the local and regional area, including the Bannerman Castle Trust and initial restoration work on the Yorktown Depot. He played a seminal role in the successful development of the highly-popular Walkway Over The Hudson project, the restoration of the historic Mount Beacon Fire Tower, and the creation of the Yorktown Community Dog Park. Active with the Westchester SPCA, he is also a consistent blood donor for more than 30 years, and has been organizing blood, bone marrow and organ donor drives at the Yorktown Community Street Festival since 2015.

This program will begin at 2 pm, is free and open to the public, and will be held at the Little Red Schoolhouse, 297 Locust Avenue, Cortlandt Manor. For more information, click here or call 1-914-736-7868.